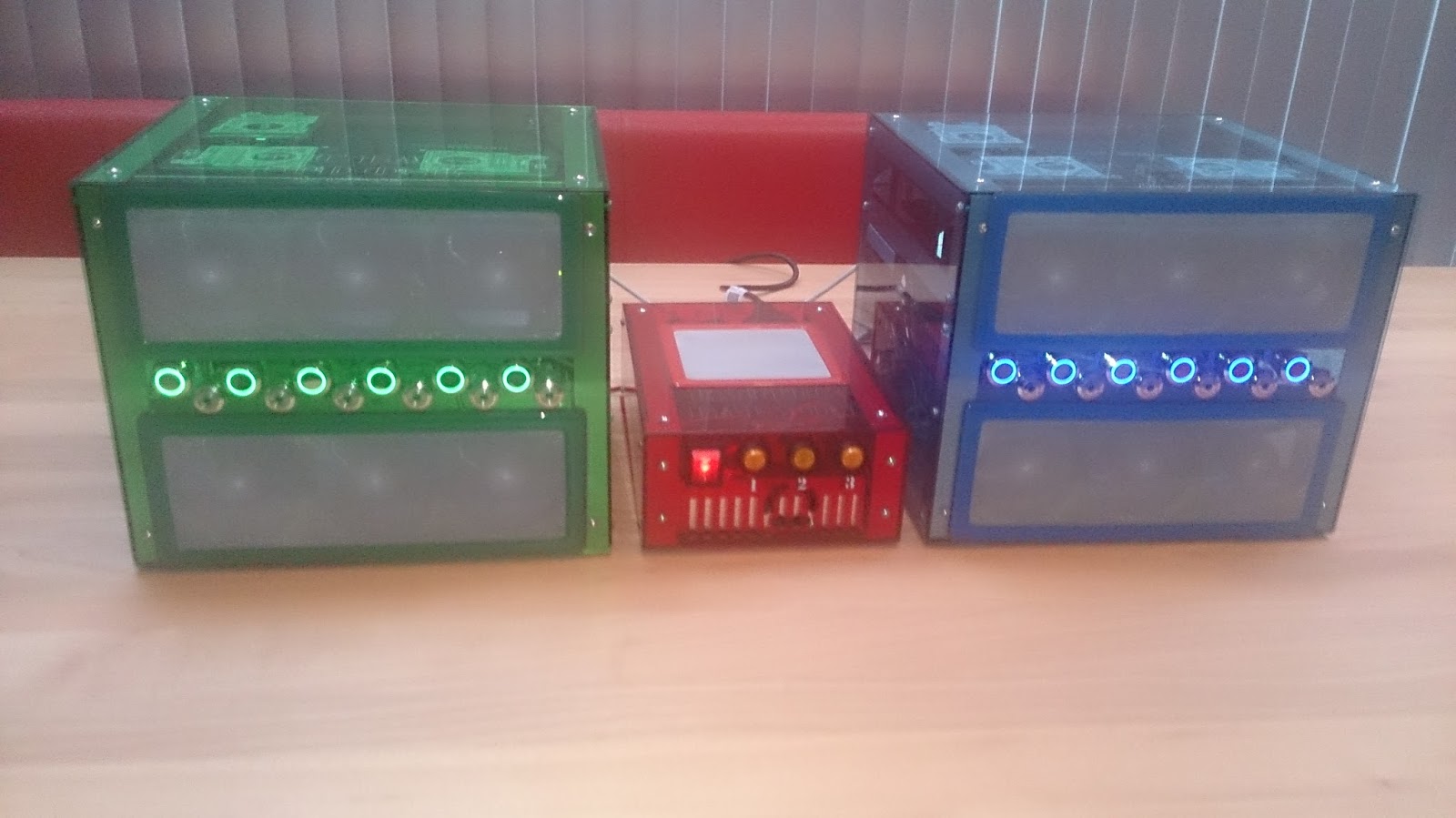 Another few weeks have gone by and since the last update, the mini cluster build has been completed.
Before anything else, let’s go through a few photo series detailing the most interesting parts of this final stretch.

Every serverboard has two push buttons connected to it: a large 19mm power button with a circular power LED and a 16mm reset button with a dot LED showing disk activity. With 6 motherboards in a chassis, that makes for twelve buttons and 24 cable pairs. Suddenly, that’s a lot of cables!

Now that the buttons are all cables up, the last components to add are of course the hard disks.
On these motherboards, the power cable for the SATA disk also comes from the motherboard. I am using the cables that were supplied with the boards even though they are a bit on the long side.

As is p(l)ainly visible on the images below, I seriously under-estimated the SATA cable management needs for this build…  The server boards are only about 5mm beneath the ridges where the disk plateau will rest. It took quite a bit of massaging the cables to get everything to sit comfortably.

But in the end, with the application of some “strong persuasion”, I was able to set the disk plateaus in place.

Finally, after all this time, the green compute pod is completed!
The horrible cable mess is clearly visible through the transparent acrylic…
Lesson learned!

A view from the back

Now that all pods are completely assembled, time to cable everything up.

Even though there is still somewhat of a mess with all those network cables, I am actually quite happy with the result here. A single power lead goes from the power pod to each compute pod to provide all the needed power and all the server board IO ports are easily reachable. I like it!

The white numbers on the blue pod were not planned, but when I peeled off the protective plastic from the acrylic, these numbers stayed behind and I kind of like the effect.

I did foresee two power sockets on the compute pods: the second unused hole is there in case I want to add some extra LED lights in the cases, and I would want to be able to switch those lights on and off, independently of the servers. However, considering the cable mess already present, I do not think I will go for it. Still: it’s always good to have options.

And here it is, the finished mini cluster:

When I started this project, I was fully aware there were going to be a lot of new things to learn. I have never been a DYI kind of person and with 20/20 hind-sight, I would certainly do certain things different now. That begin said, I am actually quite pleased with the end result: the cluster itself performs very well and using the acrylic really makes it a nice thing to look at too!

For anyone who is thinking about doing something similar, I would say: “Go for it!”

With a total spend of 3.314,91 EURO, I came out well below the 4.000,00 EURO budget.
Building the cases turned out to be less expensive then I had feared. Even with the expensive choice for arcylic, over 65% of the budget was spent on the server hardware and since in the end, that is the most important part of a cluster, that is a “good thing”.
I will of course be able to re-use most if not all of the tools I purchased, so maybe that almost 7% should not be included in the total cost..? You decide!
Most surprisingly, I spent over 150,00 EURO on shipping and administration costs. That is almost 5% of the total cost!
This age of online ordering definitely has it’s advantages and I am pretty sure that I would never have been able to source all the components I needed so efficiently without the internet, but it’s definitely a significant amount.

And here is the final spend table: